"...my baby, it does matter whether brown or white" 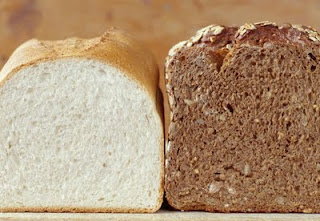 is made is from wheat flour from which the bran and germ have been removed. This is where much of the nutritional bread value is. White bread is lower in zinc, fiber, thiamin, niacin, trace elements and "good" fats and oils. White bread in many countries has to be fortified with vitamins and minerals by law during the bread making process. These are usually sprayed into the mix. It's somewhat ironic that the nutrients that are removed from wheat are re-added by this means.

Once the bran and germ is removed, the flour is bleached using potassium bromate, benzoyl peroxide or chlorine dioxide gas. Potassium bromate is also known as Bromic Acid or Potassium Salt. It's an oxidizing agent, can be fatal if swallowed, is harmful if inhaled or absorbed through the skin and may also cause kidney damage. Benzoyl peroxide is another irritant that can kill animals, birds, or fish, and cause death or low growth rate in plants. Chlorine Dioxide is also a pesticide.

is a designation often given to breads made with significant amounts of whole grain flour, usually rye or wheat.

However, just because bread is brown in color doesn't necessarily mean it's whole wheat or wholemeal. Check out the ingredients on the bread that you buy and ensure that the first ingredient is whole wheat or wholemeal flour rather than enriched wheat flour or just wheat flour. Enriched/wheat flour is the same type of flour used in white bread. The presence of caramel also is an indicator that it's not true brown/wholemeal bread as caramel is used as a coloring agent. A couple of other ingredients to avoid if possible are fructose corn syrup and partially hydrogenated oil/fats; aka trans fats.

Thus the less ingredients in the bread and the presence of wholemeal flour as the major ingredient is what you need to look out for.

You can check out this yummy brown bread pudding!

Email ThisBlogThis!Share to TwitterShare to FacebookShare to Pinterest
Labels: Nutrition and Health Benefits